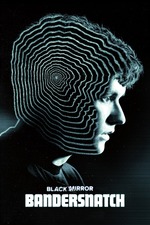 Does this count as a movie? I put well over 2 hours of my time into this and know there is a lot more content I didn't see, so I'm reviewing it dammit.

First, a Black Mirror ep with a legitimately funny sense of humor that's not in love with its pessimism?! Sign me up. This is truly a piece of art like no other. Unlike a book (boooo books), when we choose different paths, Netflix does us the favor of rewinding and skipping ahead. It's practically a game built on binge-watching. The somewhat subtle thing it does is changes a few pieces along the way. The movie/game/episode/whatever-the-fuck feels like it wants you to go in ONE direction, but, without spoiling anything, I chose a couple options multiple times in a row and got different results every single time, which was SO impressive. The only thing difficult thing about this is that, since your choice for X affects your choice for X next time you choose it (let's say X2?), it's hard to get back to the original X to make a different choice. By the time I got to the FINAL ending with credits (not the first ending with credits which was hilarious by the way), it felt incredibly satisfying.

Some of the acting is terrible, but I liked most of the story itself. It's RIDICULOUSLY meta. I mean, come on. I think this is probably its weakest part, but it probably wouldn't be on Black Mirror if it couldn't have some dumb angle like this. So maybe I just liked the gimmick. If there were other stories out there like this I'd probably like them much, much more. I really enjoyed reading Bob Powers's (comedy writer) choose-your-own adventure novels back in the day.

That pacman metaphor speech tho.