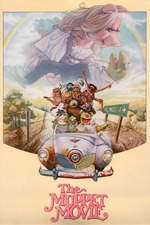 The other day, on a particularly difficult and kind of miserable hike, I saw a rainbow, and I started singing Rainbow Connection to myself. It was unbelieveable how much this cheered me up. Later in the car, when I finally got out of the backcountry and got signal again, I streamed the version from the newer movie, and I immediately started tearing up. This is a powerful song. It’s the only one with real staying power from this movie, but there are some really good funny and heartfelt songs in here too. I didn’t remember such a sweet Gonzo song:

“There's not a word yet for old friends who've just met.
Part heaven, part space, or have I found my place?
You can just visit, but I plan to stay.”

The way the unaccompanied harmonica ends the song is just to beautiful.

I complain on here all the time about comedies and movies that are too cynical, but this just has so much joy and so much heart. The jokes aren’t mean, and I wish all comedy were like that. Some of it’s really corny and very obviously breaks the fourth wall with multiple running gags, but this movie, like all muppets humor leans into it so hard in the sweetest way. It's so rare to see a movie break the fourth wall without even a hint of sarcasm.

The cameos are almost better when you don’t know the celebrity because they’re just these extra long shots on some old white guy’s face before he even says or does anything.

Is this one of those sneakily vegetarian movies? The more vegan I become, the more odd eating meat seems, but the movie takes a very strong stance against eating frog legs. It’s definitely sneakily patriotic, and I don’t mean that in a bad way. Fozzy sings America the Beautiful of course, but the main story is about a frog, raised in the swamps, finds a bunch of misfits and tries to make it big. It’s the goddamn American dream.