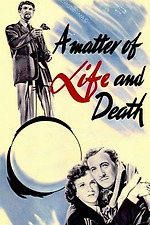 I swear, I could be rewatching A Matter of Life and Death in twenty years, and I’ll still cry when the six American men introduce themselves, and you realize they’re mostly immigrants or direct descendants of immigrants.

Generally, all that I loved about this film and all that I didn’t care for when I watched it for the first time in September 2019 remained the same. I’m happy that I was consistent in my love for this one. I still could not say that I “bought” the love story, or that I understood half of what the American prosecutor was trying to say.

What I do hope for, though, is that the next time I rewatch this Powell/Pressburger film, I am once again enamored with the law and the justice for which it stands for. After almost three years as a practicing attorney, my relationship with the field has soured in a way I could never have anticipated being the wide-eyed law student I once was.

I did allow myself to be a bit more apprehensive about the fantasy part of the film. Not in not believing it, but rather in watching A Matter of Life and Death as if the fantastical world was nothing more than the inner-workings of Peter’s mind -- a sign that he was truly suffering from neurological issues. Maybe he really did have a parachute, and he just didn’t realize because of said neurological issues?! (Though apparently the film was inspired by a true story of a soldier who jumped out of a plane without a parachute and survived.)

I can see how someone might not like this movie. It really is a very strange one. But I do love it nonetheless.