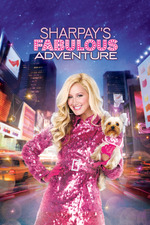 I assume the executives who greenlit this atrocity are currently remanded in The Hague awaiting trial for crimes against humanity.

A movie about a bitchy girl whose name is a pun on a small dog breed is upstaged by her small dog, who is somehow cast in a Broadway show after a talent scout sees (the dog) perform in Albuquerque.

Oh, and the scout is played by Joey Jeremiah from DeGrassi.

I couldn't make this up if I wanted to.

Still, one star to see that Joey Jeremiah isn't living under a bridge.

A brief play-by-play of high and lowlights:

- it's a year later.
- Sharpay stars in a local theatre production which seems to be all about how fabulous she was.
- Her dad tells her that she's been messing around for a year since she left high school, so clearly the whole 'going to U of A and co-directing' at the end of HSM3 thing didn't work out.
- At the end of this big production number, a theatre producer (or casting agent), played by Pat Mastrioanni, or Joey Jeremiah from DeGrassi, tells her that he's casting a New York production and he wants her to come in to audition for it.
- Dad says no way, it's a waste of time. Agrees to let her go to New York for one month and if she fails she has to come back and work at the country club from HSM2.
- Still no sign of Ryan.
- Sharpay goes to New York. Looks suspiciously like Toronto.
- Yep, that's definitely Toronto.
- Montage montage montage
- Sharpay turns up to the audition.
- FINDS OUT THE AUDITION IS ACTUALLY FOR HER SMALL DOG
- Yes, pause to note that Joey Jeremiah was scouting local theatre productions in New Mexico to cast a small dog in a Broadway show.
- Show is called 'A Girl's Best Friend' (being the dog)
- Show stars repellent 'star' actress who is awful to everyone.
- Star Actress routinely calls Sharpay 'SHARPIE'
- Small dog has to compete against another small dog for this role.
- Obviously, the dogs fall in love. Obviously.
- Cover of Katrina and the Waves. They're really scrambling for musical content.
- Sharpay competes against the 12 year old owner of the other dog and pulls pranks like using dog whistles and stray cats to distract the other dog
- Sharpay becomes awful star actress's personal assistant
- Cleaning montage. Not sure what the awful actress has been eating to block up the toilet like that.
- Random side love story with generic blonde boy
- Star actress reveals she wants the dogs cut from the show the night of opening, then quits the show for some reason
- Director decides to cancel the show
- Sharpay reveals she knows the whole show
- Sharpay stars in the lead at the Royal Alexandra Theatre, Toronto, uh, I mean Broadway
- Kiss between blonde boy and the former villain of the High School Musical series

This is so offensive in so many ways. Sharpay is given a chance to carry the movie but there's nothing endearing about her, and while it's good to see her grow up a bit, everything just falls in her lap in the end anyway.

The things I do for my kids.