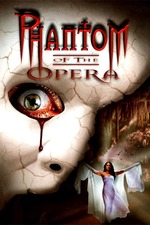 My 22nd 1998 watch.
A first time view! And, this isn't that bad.
I'm digging deeper into those 90s Argento movies and starting to realise that the 90s is his "weird" phase.
Nevertheless, weird doesn't necessarily mean bad. (Not 'good' either)

The gore is great, the kills are awesome (there's a beheading of a little person in here), the movie is never boring and the
DOP is the one from Opera and Popcorn and operated the camera in Star Wars, Phantom Of The Paradise,
Barry Lynon and many more. So you know the imagery is great.

But under the motto "Bigger is better". Argento made his version of Phantom Of The Opera already in his movie Opera.
That one amped everything up.

Just to give you all a glimpse on how weird this movie is.
In this version of Gaston Leroux's classic, the "phantom" is a good looking man
(instead of a deformed, masked guy. I don't know why he wears his mask in the artwork)
that is raised by rats and at some point he let the rats go inside his pants for some sexual pleasure.

I'm wondering, if the name "Argento" wasn't attached on this movie, would people still hate it that much?