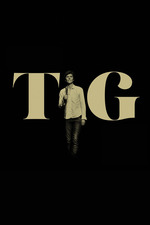 If I were to tell you a film was "simple", would you assume I meant it in a negative or positive way? It sounds so negative, to call something as complicated to make as a film "simple", but often times simplicity can be so damn wonderful, especially in regards to a documentary.

So damn wonderful, the simplicity of it all.

Except here's the thing: if you push aside the actual skill of the filmmaker and the fact that the new Netflix Original Documentary Tig is about one woman and her personal journey, there is nothing simple about what we see happening on the screen throughout. Life isn't simple. Death isn't simple. Joy isn't simple. Pain isn't simple.

Yet here I am, still basking in the simplicity of Tig. I absolutely adore the narrow focus of the picture, the fact that we are seeing her various stand up bits, from the material that gets used on a daily basis to the absolutely iconic and game changing set she did one shortly after being diagnosed with breast cancer in 2012, but these jokes carry so much more weight the more we get to know and learn about the person delivering them.

This film is about her, but it's also about so many other people in the world who have been knocked down over and over and over again and had to find the strength to get back up again. The people who have emerged on the other side of tragedy with a smile on their face that seems incomprehensible considering their pain. The people who manage to find humor during a time when the desk just seems to be stacked against them time and time again. Tig Notaro is a wonderful, strong, inspiring person and this film does a brilliant job of reflecting these traits while, again, maintaining a simplicity in focus and vision that makes the whole experience feel honest and intimate.

Illness, tragedy, heartbreak, disease, and then amazingly, laughter. Moving forward even when everything seems to be pushing her back. Finding hope in a world that can seem so hopeless.

I never once felt manipulated or mislead by the story of Tig Notaro. Not once. I laughed, I hurt and I was emotionally moved by both her darkest moments and also when her brightness still managed to shine through. When the final frame disappeared from the screen, I couldn't shake the power of seeing the human spirit triumph over so many hardships.

The filmmaking and storytelling approach of Tig is simple.

Yet nothing is simple about Tig.

No Blogging for Old Men