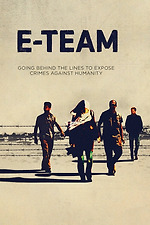 From the directing duo of Oscar-winner Ross Kauffman (Born Into Brothels: Calcutta's Red Light Kids) and Katy Chevigny, this intimate if messy look at the Human Rights Watch's "E-Team" of war crime investigators is enormously relevant and well-wrought throughout.

The opening images of E-Team show one of the team's focal members, Ole, interviewing civilians in Syria as a plane flies overhead, causing everyone in the room to fly into a panicked fear for their lives. However, this is just a tease of how brave and selfless these dedicated individuals are; things only get more insane when Ole and his wife Anya are then shown smuggling themselves into the country, as they conduct investigations as to Bashar al-Assad's complicity in attacking his own civilians.

Ole, Anya and the other tirelessly devoted investigators they work with seem so hilariously in over their heads from the outset, and that's primarily what keeps the doc so totally engrossing. To find accountability and to bring someone to justice for violating international law is no picnic, and in examining the rigours of how the E-Team goes about this - as well as verifying eyewitness accounts and attempting to convince the public (namely Russia) of the Syrian government's guilt - the film is effortlessly fascinating.

Unsurprisingly, real results are hard to come by, and the subjects spend a good deal of their time riffing on the difficult, imperfect nature of activism by its sheer definition. Pragmatism, then, is the key; get the footage of the destruction online for the world to see, and as one participants puts it, try to make the war as tolerable as possible for the poor souls stuck in the middle of it.

If the brief coverage of the 2011 toppling of Gaddafi's regime in Libya feels disappointingly piecemeal and therefore meshes somewhat awkwardly with the more in-depth Syria portion, this doc still entrenches viewers deep in not just the dangerous territories - one brief section in a recently bombed-out region of Syria is especially eerie - but also the strained personal lives of the team. This is particularly true of Ole and Anya, who have one young child and are preparing for another on the way. All in all, complete with its flaws, E-Team is a compelling portrait of a noble group of brave, intrepid investigators.