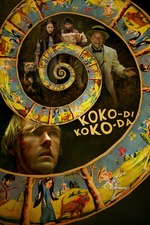 Johannes Nyholm's horror film about a grieving couple, trapped in a looping forest, terrorized by a psychopath and his friends, it is 90 minutes long.

Koko begins decently enough, with a blackly funny opening set of scenes, the transition between the initial grotesque comedy to the beginning tragedy is handled very well.
Then you're treated to a really goofy, yet weird, creepy crew of characters, that seem perversely fun to watch, there's a couple of surreal, if very obvious in their symbolism, animated scenes as well, so, so far so good?
Despite this enjoyable enough thirty minutes and such, even with the decent performances and good looking location, guiltily watchable, initially darkly comic cruelty of its antagonist, sadly grows very repetitive and much of what I have praised, starts to wear off on the viewer, there's a sense of the un-sustained and while the segment just before another animated sequence comes on is pretty cool and seems to be steering the right direction, the film's conclusion, isn't really a whole lot of anything, simply, kind of just stopping.
The loop structure becomes lazy and the bad guy needed to be utilized more and more effectively eventually as the film went on.
this'd probably be a pretty solid short, but it fizzles out after a while as a film.