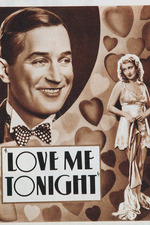 Mamoulien takes the already established chemistry of Maurice Chevalier and Jeanette McDonald and builds a magical musical world all his own. From the rhythmic sounds of Parisian streets at the beginning of the film, the film establishes a musical world where music is not only the avenue that all characters express their true feeling but a way of connecting characters of all classes throughout France.

The Isn't It Romantic number, which begins in Maurice's tailor shop and travels through taxis, the train, and even soldiers to reach Jeanette at her chateau, is the best moment of the picture centered by a catchy tune that you easily remember after the film ends. I love the sing-song quality of much of the spoken dialogue, something that could be annoying if not executed properly. The story of a princess falling in love with a commoner may not be the most original ever, the film's unique style turns Love Me Tonight into a special and innovative early Hollywood musical.