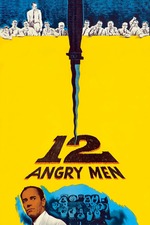 It's always difficult to keep personal prejudice out of a thing like this. And wherever you run into it, prejudice always obscures the truth.

Sidney Lumet’s debut, one location, 12 characters, entirely dialogue driven, the film that started the courtroom drama scenario which changed cinema forever. The camera uses wide shot lenses keeping all of the characters in frame then as the film progresses, the framing is tighter and the camera lenses are increased, resulting mostly in close ups bringing us closer to the characters creating this claustrophobic tension; simple but brilliant filmmaking. Henry Fonda is always a joy to watch. A story like this is fascinating to me in many ways since it starts in the third act, one could argue that the entire trial is actually the first two acts of the story, this 90 minute debate really is the third act of the story, I find that fascinating.

It’s one of those films that gets better as it goes on. The screenplay reminds me of a whodunnit, it has the set up then slowly creeps in the evidence, twists and it’s all deconstructed. With its humane portrayal of humanity and captivating electrifying dialogue, it balances 12 characters extremely well and the message of the film is timeless. You should always create your own opinion and not be swayed by others, avoid a racist, prejudice and judgemental mind. It’s a miracle that Hollywood hasn’t remade this with women. It’s one of the best & most simplest films you’ll ever watch, every aspect is masterclass filmmaking. We all dream that our directorial debut is as perfect as this, perfect is the only word to describe this.

Fun fact: Because the painstaking rehearsals for the film lasted an exhausting two weeks, filming had to be completed in an unprecedented 21 days.