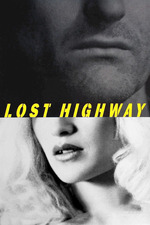 This is a challenging film for me to review. It's bizzare, the plot is very symbolic and hard to summarize, and I just have mixed feelings about the overall experience. I'll try and do my best though.

Lost Highway follows Fred Medison, a jazz musician (saxophonist) who lives with his wife, Renee. One day the start getting weird tapes that couldn't have been filmed without someone getting inside their house, and things only get weirder and weirder. Again, it's a REALLY tough movie to sum up without giving away any spoilers, but I'll try to communicate the general vibe to you later on.

Well, the core of this film, in my opinion, lies in how it presents the concept of truth. We can run from the truth, but we can't hide. We can lie to ourselves, but reality and our subconscious won't let it last. And that's kinda the point of the film, and it's done quite well. The hazy, surrealy ways Lynch uses to portray these ideas are somewhat familiar to me after Blue Velvet, and it does indeed have the unique Lynchian spark to it.

I think I like the soundtrack, for most of the time (sometimes it's a little too odd I think, like with the Ramnstein stuff). It reflects the lunacy that pervails throughout the entire film, which is cool. The actors are all very solid, especially Robert Blake as Mystery Man (who kinda steals the show).

So yeah, the good stuff is practically the fact that Lynch excutes this surreal concept in his own unique way, it's well made and it makes think. it has strong, memorable imagery too.

I think that my main problem is a certain lack of emotional involvement. I get why the film feels cold, in many ways, but I don't feel like there's something that affected me much emotionally. It's more of an intriguing psychological journey through the eyes of a man in denial. Interesting, yes. Moving? Not so much.

To wrap it up - Lost Highway explores denial in a way that's maybe not completely groundbreaking, but is done uniquely due to Lynch's distinct style. It's well made, it has memorable imagery and many things to dig into. I think I'm gonna give it a 7.6/10. Might change as I return to it after digging more into Lynch's filmography, but these are my feelings for now.