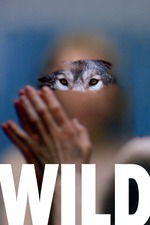 I really don´t write something like this here very often but if you have the chance to see this film, go and grab it !

Nicolette Krebitz third feature film is a beautiful, totally free, associative love poem about a transformation. Away from this stinky office cell down to the wilderness, this love story and sexual awakening between a young woman and a wolf is told with a very light sense of metaphores. Instead of an excessive psychology, the film is so casual and so beautiful in it´s visuals, filled with a lot of humor caused by the great play of Lilith Stangenberg and Georg Friedrich.
WILD is a real rarity in german cinema not only because you see something in it, you don´t often see here on screen, it´s the natural behavior of the film to show this story in such a powerful and beautiful way like Krebitz did.
Well and after UNTER DIR DIE STADT, DIE LÜGEN DER SIEGER and IM SCHATTEN this is the third film i´ve seen with Reinhold Vorschneiders camerawork and i really admire his style.