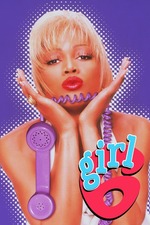 When I originally reviewed Girl 6 last January, I wrote I was bored about halfway through the film and that in this new era of established sexual economies, the film would be more interesting being created in this generation. That was my thought process in not having seen the movie in nearly 20 years.

While I wasn't bored during the rewatch that I finished a half hour ago, the flaws of this movie from Spike as a director and screenplay writer Suzan-Lori Parks are hard to ignore. I thought Girl 6 was bad but I got my reasoning initially wrong. It's not that the movie is boring or it would be better suited for 2020 but because I don't think Lee and Parks knew where to steer the story. It tries touch on so many topics that it never commits to nor develops one fully.

For example, G6 comments on how exploitative and heartless the movie industry is, particularly when dealing with black women. Judy is being asked to expose herself for a movie role. She is made to feel woefully uncomfortable by director QT. When she gives in and removes her top, it's extremely upsetting that Spike made the decision to show Theresa Randle's breast on camera. In a sense, Lee feels just as bad as QT, especially when you think how a vast majority of Spike's films has women that exposure themselves on camera. But, even with the wrenching scene, there's no further exploration done of the movie industry at all, not even by Judy. So what was the true purpose of showing Judy's breast?

Also, I'm not sure if Lee or Parker knew what to do with Judy. She was a woman that was on the verge of losing grip on reality but did she ever get it back? Throughout the film, other than Jimmy, none of the men are worth a damn (which I don't have a problem with) but was it the trash men in her universe or her naivety in being a sex worker that started her dissent into madness? Was she becoming addicted to the money, the praise from her johns (who all happen to be men) or both?

Girl 6 ends pretty abruptly: Judy leaves New York for LA under the guise of wanting to get back into the movie industry (but only after a john threatened to murder her) only to audition for another film director that asks her to expose herself again. What lessons are there to extrapolate from this movie? She, literally, time-is-a-flat-circle'd herself. When Judy leaves the audition, her head is held high and it seems as if she has gained autonomy of herself but, if she had that sense of self-worth already, would she had even auditioned again, especially after the traumatic experience with QT?

(Reading this above paragraph back, I do not want it to come off as if I believe Judy is to blame for past or future trauma, but I’m more making the point that it was a missed opportunities for Lee and Parks not to explore the original episode with QT and why she continued to pursue a career in acting after the event.)

Billing G6 as a comedy feels weird too. The only laughs come at the expense of the men's weird sexual predilections (which in 1996 may not have been a big deal but in 2020 and being a sex positive society, how cool is that really?); everything else is your standard drama. There are too many half-baked ideas ignore especially when sex or sexuality plays a role in nearly every Spike Lee feature.