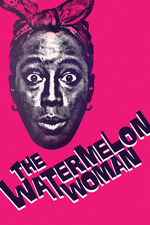 The Watermelon Woman is the type of movie that if Starz or Cinemax could’ve replayed twice a day for two months in a row in 2000, it would’ve probably been one of my favorite movies as a teenager. It’s the kind of movie that would’ve inspired me to go into filmmaking as a legitimate goal for myself.

Getting the easy observation out of the way: Watermelon Woman is stunning stylistically. Dunye’s remarkable ability to create these characters, who are beautiful and funny and flawed, is an achievement.

Digging deeper into the racial dynamics and sexual politics of the film, and you’ll find that Dunye approaches these complicated (and not so complicated) issues with an intelligent touch. She’s not preachy; she presents each characters in a way that’s honest and authentic.

For me, I keep thinking back on Tamara. The way her dislike of white folks is manifested in WW lingers in my brain, like the “If a tree falls in the woods...” question. Tamara openly dismisses Cheryl’s relationship with Diana (her lover) and is discourteous to Annie (the newly hired video store clerk).

While Tamara’s assessment of Diana’s sexual fetishization of Black folks turned out to be accurate (I mean, she rented Jason’s Lyric; what white person was doing that in 1996?), she was wrong to dismiss to Annie, who’s help was pivotal on Cheryl’s journey. Ultimately, The Watermelon Woman is a story about Black lesbians outside of whiteness and the question that stands out to me is, was Tamara right for her dismissals? In a way, Tamara was both wrong and right at the same time.

I know why I never got a chance to see this movie on cable. It’s incredibly sad but, nonetheless, this is an amazing film.