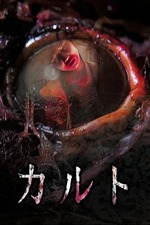 "Somebody set up us the bomb"

We've back in the Kojiverse again! Should I be watching his movies in the correct order?

Also it seems like this movie might be part 2 of a 3 part sequence, although so far the only reference I can find to that is from another review here on letterboxd:

"The other movies that are a part of this series are called "The Crone" and "Talk to the Dead", respectively... All written and directed by three different directors, this is the only one that is shot in a found footage style... Despite being a series, the stories are not interconnected and viewing of all three flicks is not necessary in order to watch them."

'Cult' is a melodramatic affair, invoking real life 'Most Haunted' style spooky investigation tv shows, as 3 female idols are hired to "investigate" a haunting which turns serious, and they stick around because, er, reasons.

It becomes so arch at times that it veers into comedy, but Shiraishi applies his mastery of the found footage form and maintains a tense atmosphere.

The end of the movie went on a bit, and, quite frankly, made me a little bored, but overall I'd say it was a decent watch.