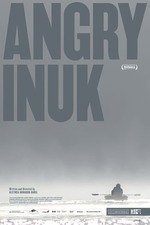 A counter-narrative that lays out the dubious tactics and outright lies of certain animal rights groups, Angry Inuk works really well as activist filmmaking. Inuk director Alethea Arnaquq-Baril puts herself prominently into a film the topic of which is deeply personal: damage to the seal hunting industry by largely wealthy white activists does direct damage to some of the most vulnerable and isolated people living in the North.

We get to know these people on a small, personal scale, as when we watch the long, graphic yet meticulate process of butchering a seal in the film's brilliant and uncompromising opening scene. And we get to know them on a global scale, following a group of Inuit activists led by lawyer Aaju Peter as they travel to try to convince the European Union to lift a ban on seal product imports.

This is a film that could (and should) only have been made by an Inuk filmmaker, shot through with humour and desperation born of a legacy of being ignored. Beyond the case the film makes for a sustainable economy, it got me thinking about tone policing and the devaluing of certain activist perspectives and methods. Angry Inuk poses the question of what it means to be angry and to have your voice heard when your anger is so much more quietly manifested than that of your opponents. It doesn't make it any less valid, but you get the sense that Arnaquq-Baril wonders whether it makes it less effective. In Inuit culture, she says, you lose an argument if you lose your temper. That's a criticism I often see leveled at protestors of colour from a place of white respectability politics. But yet you strangely never see a shortage of angry white folks. There are a lot of them in this film, crying shame on those who hunt seals. But when you see that juxtaposed with a culture trying to survive in a land with so few resources, it's those angry white folks who really look shameful.