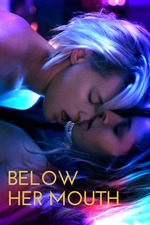 Essentially just a feature-length episode of The L Word, Below Her Mouth is a stylish, sexy, and painfully romantic portrait of discovering an inconvenient love. It's daring in terms of its full-on commitment to the female gaze, even if there doesn't seem to be much going on thematically.

I was in awe of the style, throughout. The film is gorgeously art-designed. It's clear director April Mullen and her crew had intimate knowledge of Toronto, resulting in a film that captures that magic rush of discovering secret pockets of the city where it feels like anything can happen.

The acting is a bit stilted, but I think it actually lends to the awkwardness of a new relationship. On the whole, the film is so much style that there isn't much dialogue. The lead actresses have physical chemistry and the movie wisely relies on that and keeps their conversations to a minimum. It's not that they're bad, but one half of the pair (Erika Linder, the one who looks just like Kristen Stewart) is a model making her feature acting debut, and many of her lines are muffled by an attempt to hide her Swedish accent.

I wish all Canadian films looked this good.

Those Who Make Revolution Halfway Only Dig Their…