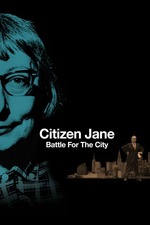 Citizen Jane: Battle for the City

Watching the first ever public screening of Citizen Jane in Jane Jacobs' own Toronto neighbourhood (in her own community theatre) lent extra credence to the film's defense of her philosophy on urban preservation. The film elegantly yet accessibly delineates the opposing worldviews of Robert Moses and Jacobs. Moses saw cities in terms of upward movement that served to position the upper class high above the rest. But what do you see when you view the city from the sky? Certainly not people, as Jacobs saw. She envisioned cities as living organisms, with people as the cells, each with individual needs and values. Cities, thus, should be built according to the way people lived, not as a way to force them into an ideal way of living. It's really a battle between appreciating the organised chaos that is millions of people interacting in a space versus attempting to impose a strict order on it.

Citizen Jane is a highly political film in the sense that the personal is political. Those who live in and make up cities have a vested interest in the issues that affect them, issues that persist long past the time that Jacobs fought to keep cities serving their citizens rather than citizens serving cities. This is civic activism as superheroism, wrapped around a tight narrative and featuring a legitimate comic book supervillain in Moses. It's as much a love letter to Jacobs' ideals, activism, and urban vision as it is to Jacobs herself.

As a film heavy on archival footage, Citizen Jane makes the most of having to rely on that which is available, even if it occasionally means grinding to a halt visually to listen to an audio recording while featuring a still image onscreen. Moments like these would have been better served showing the city itself, especially given how effectively it uses beautiful and often haunting urban photography throughout.