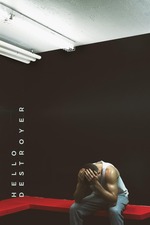 While Hello Destroyer is ostensibly a film about hockey, it is unexpectedly light on and unconcerned with the sport itself, even in terms of the role violence plays on the ice and in the locker room. Rather, the film is a slow-burning character study that alternately functions as a meditation on the permeation of violence in culture as a whole. Jared Abrahamson (TV's Fear the Walking Dead) stars as Tyson Burr, a rookie enforcer for the fictional Prince George Warriors. Abrahamson is remarkably naturalistic; in fact, most of the performances are thanks to the use of a mix of trained and non-actors. It is only Kurt Max Runte as the Warriors' coach whose performance feels like a performance. It's notable, but only because everything around him feels so authentic, right down to the rural Canadian accents.

Tyson's terse relationships with those around him and his inability to ask for help are painfully familiar aspects of masculinity. It is striking how similar the locker room looks to the prison cell Tyson finds himself in. "Be careful with him," says a family member to Tyson as he takes a baby in his arms. Do we echo the sentiment? Is it because we have seen his capacity for violence, or because we have a cultural assumption that male violence is inevitable and mutually-exclusive to caregiving?

Director Kevan Funk creates an oppressive atmosphere of tension and claustrophobia through the use of impeccable sound design, close-ups, and sustained shots (admittedly too sustained at times, making for a film longer than it needed to be). Funk skillfully subverts expectations by building tension and then deflating it. And while the ending is arguably inevitable, even that is rendered with surprising subtlety, framed with a mundane shot of non-action that implicates family, society, and Canadian identity in an ongoing cycle of violence.