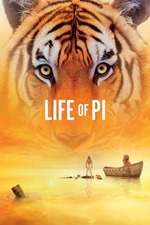 It is interesting the extent to which the technical construction of Ang Lee's Life of Pi mirrors its thematic construction on the nature of belief. The film was largely shot on a boat with a single actor in front of a green screen, but for it to work we need to believe that it is a boy lost on the ocean with a tiger. That tiger, Richard Parker, is cobbled together through digital creation and live animal performance, and is utterly and completely believable. The way the animators have brought him to life not just in his physical detail -- they have not merely animated his fur, but animated it wet in some scenes -- but in the humane touches they bring to him as a character. Eyes are notoriously the dead zone of computer animation, but the shots that focus in on the tiger's face and ask us whether there is a soul there need to have enough humanity for that question to matter: and they do. The title character is played both by Suraj Sharma -- wonderful in his acting debut -- and Irrfan Khan in the narrative's bookend sequences, both of whom are perfectly cast, Sharma, as the young Pi, who has to sell all of the digitally-created scenes on the boat, and Khan, who, as the adult Pi, must convey living with all the experiences of his shipwreck ordeal. Lee uses the central performance as an anchor to all of the digital pageantry, a world of magical realism and visual splendor that keeps us motivated to see Pi's story to the end.
And it is that story that comprises the central thematic conceit of the film, as Pi is telling of his experiences long after the fact. At one point a character claims that Pi's story will "make you believe in God." It is a bold claim for a film to make, and I am not convinced that is even the claim the film -- based on Yann Martel's "unfilmable" 2001 novel of the same name -- is making. Rather, this is a story exploring the nature of belief itself, and the importance of storytelling to making sense of life. To quote the author Thomas King, "there are no truths, only stories." This is a powerful, provocative film, and one of the best of the year.