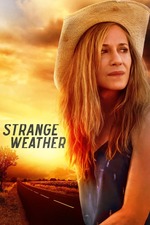 Strange Weather is a particular slice of Americana, the kind you see in films like Winter's Bone that tell stories about protagonists that are recognisable for their unremarkability. This film follows Darcy Baylor (Holly Hunter), a grieving single mother who learns some information that changes her perspective on her only son's death and leads her on a road trip to find the truth.

The stakes of Strange Weather are so small they would be almost laughable were they not so personal. Even Darcy's close friends chide her for the folly of following this path. But Hunter is magnificent at conveying the character's desperation in a film that I wouldn't even call heavy or sober. Despite some harrowing scenes the film has lightness and warmth that serve the characters.

Writer/director Katherine Dieckmann has a gift for crafting an authentic portrait of the American south, from the particular slang to the way weather plays into the lives of rural residents. She even gets a few shots in at class differences. When Darcy visits an acquaintance and appears concerned about her apparent flaunting of water restrictions, the woman responds, "we have our own water regulations up here." So this is how the other half lives, though Darcy seems oblivious.

Dieckmann really subtly rolls out just enough back-story to let you follow the narrative and piece things together, but she unfortunately undercuts that subtlety with too much exposition. It's minor, but distracts from the nuance of the characters, especially when the actors are doing such great work. Hunter, who is in nearly every scene in the film, is probably going to be nominated for an Oscar if the film is distributed. But Carrie Coon and Kim Coates are both fantastic as well as Darcy's best friend and ex-lover, respectively. Scenes between Coon and Hunter prove the tragedy of how infrequently those actresses are cast in leading roles.

Dieckmann talked about how difficult it is ("next to impossible") to finance films about middle-aged women. Strange Weather deserves distribution not just because it's a strong film, but because we see so relatively few stories like this.