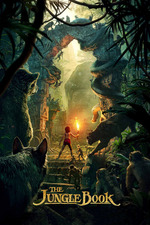 What I appreciated about Disney's recent live-action take on Maleficent was the way it put a spin on the Sleeping Beauty myth and made that story about something different. The Jungle Book has no such spin, even from the already-decent live-action remake Disney released in 1994. The only real update here is modern animation technology, which makes for a gorgeous visual experience in a way that this story hasn't seen. Gone is the crude animation of the 1960s and the real trained animals of the 1990s in favour of hyper-real animated animals a la Richard Parker in The Life of Pi.

This is top shelf voice work from actors such as Lupita Nyong'o, Bill Murray as Baloo (has there ever been a more perfect casting choice?), Christopher Walken, and Idris Elba. But I was even more charmed by the young Neel Sethi, who plays Mowgli. He has a casual warmth and the type of physicality that genuinely feels as though he grew up among wild animals. Some of the film's most thrilling scenes are just watching him move through the jungle.

There are pacing issues, and the half-hearted addition of classic Disney songs feels awkward here. The film ends differently than the original Disney version, in a way that has implications I'm still not sure of. But primarily this iteration The Jungle Book is just a fast-paced, fun adventure story that is obviously aimed at children despite being too intense for some of the younger ones.