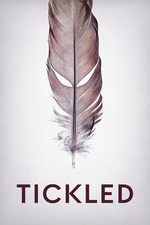 Tickled is one of those documentaries that unfolds like a mystery, one where you never quite know where it's going next. What starts as a simple if odd discovery of an alternative "sport" called competitive endurance tickling becomes altogether something else.

Tickled ponders a range of issues from investigative journalism, fetishes, the internet and privacy, power and control, and mental health. It doesn't ultimately make any profound statements on any of these topics, but it's a consistently entertaining yarn.

It's essentially a film full of talking, and some of the formal choices made to fill the visual space feel out of place, but at its best the film has the hallmarks of a great documentary: the power of the lens and the microphone to expose truth. The investigative nature of the film made me think of the current state of journalism and how those in power have lashed out against "the media" and attempts to expose corruption and exploitation. Journalist Dylan Farrier's tactics are those of a trickster (when asked not to film inside a meeting room, he secretly audio records it instead, and films the meeting from outside the building), looking for loopholes like a good investigator would. Repeated legal threats loom over the film in a way that suggests a spectre of power that comes with being able to throw frivolous lawsuits at those who cannot afford to meet them. Even though, ostensibly, Farrier has broken no laws, the fear that he is pouring money he doesn't have into a project that may go nowhere or be shut down is evident in his face throughout the film. Even one of his investors suggests he avoid pursuing a particular subject, despite the fact that the entire film rests on doing so. The tendrils of power creep into all manner of spaces.

Tickled is a fascinating doc, despite its flaws. While it may not have much to offer on subsequent viewings, it undoubtedly deserves to be seen once.