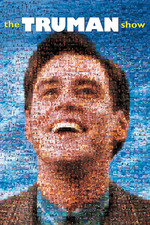 Comical but down to earth, sympathetic but never pitiful, Truman Burbank is the perfect protagonist for us to project our own lives onto in a film where that's the most important factor. It's a high-concept comedy about a man who ultimately wants to live his life honestly, but is stuck in an environment where everyone around him insists on perpetuating a fiction. I maintain that it could have been a brilliant psychological thriller in which we as an audience discover the artifice of his existence along with him throughout, but by going the route of a dramedy it does something I hadn't consciously noticed previously: as soon as Truman becomes aware that he isn't living the life he wants, he immediately works on changing that. He doesn't want his every action determined by The Man In The Sky, he doesn't want every single item he comes across to be an advertisement for a brand, he doesn't want fake friends and fake love. He just wants freedom, complete autonomy to live, try new things, make mistakes, love, laugh and cry. As real as his life might have previously been perceived, an awareness of its superficiality doesn't allow for fulfillment.