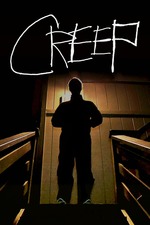 Creep is a masterful concoction of awkward hilarity and vivid horror, using the mix in order to craft sequences of profound terror and genuine laughs. From frame one, the conviction by Patrick Brice and Mark Duplass is oddly detailed and naturalistic, only adding to the shivering and indelible atmosphere of the entire film.

The meandering beginning of most found-footage films feel like a burden to the audience, spouting exposition rather than setting a appropriate tone, but example found-footage classics like The Blair Witch Project and [REC] find a brilliant balance between necessary information and thrusting the viewer into its respective world. Creep joins these two masterful works in not just this regard, but also in the realms of tangible danger and frightful suspense.

Let me tell you, I don't easily scared, but this little film freaked me the fuck out. Jump-scares are plentiful but weirdly necessary, especially since the film slowly jacks up the notches in regards to tension and mystery. Mark Duplass OWNS this film as Josef, and his work here culminates in my favorite performance of the year so far. I cannot fully describe how incredible he is. It's honestly Oscar-worthy, and his tone glides into multiple facets of horror, comedy, and honesty that has to be seen to believed.

And it isn't just the performances that are far above any found-footage film in recent years. The direction is relentlessly propulsive, eerily smashing convention while still committing to essential horror rules. In spite of being sadly dropped into the endless darkness that is otherwise known as the "Netflix horror section", Creep showcases tremendous care for framing and complicated tension build-up. The camera drifts and leans around corners with the same anticipation as the viewer, revealing key information with sly appearances and shadowy glimpses. If only I could've seen this in a packed theatre!

Overall, Creep is a deliriously scary and hilarious gem of horror cinema, evoking sinister atmosphere and hair-raising revelations. Please, whatever you do, just stay up late one night, turn up the sound, and experience this. You won't regret it.