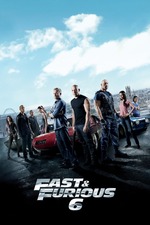 I thought I preferred Fast Five, but while Justin Lin's deep-dive into the 'Ocean's Eleven'/'superhero'/Crime-caper mixtape genre is definitely successful (I mean, how could it not be? They tow a fucking BANK safe through downtown Rio.), it is outmatched by the Telemundo soul and the surreal escapades of the set-pieces in Fast and Furious 6. This entry has it all: cars *specifically designed* to flip other cars, The Vin Diesel Brood face, Paul Walker getting angry, Tyrese Gibson being surprised at the chaos around him, Gal Gadot, Michelle Rodriguez, and Gina Carano never lowering their bravado below the level of 'complete-unadulterated-badass', never-ending establishing shots, a gigantic tank which has the power to run over other cars like they're potato chips, and, last but not least, a cargo plane which, of course, has an eventual capacity for explosion.

And believe me, Fast and Furious 6 doesn't disappoint in showcasing each of these elements, but what's beautiful is Lin's sincere belief in the passions of the characters and the adventures they embark on. It isn't merely interesting because of the wonderful sights and sounds (the soundtrack is a gearhead's (or any action fan's) wetdream), but how Lin maneuvers this family within the delightful spaces he creates. That middle set-piece on the highway is such a fever-rush of crumbling concrete and shredded metal that to have heroic movements and poetic gestures within the foundation of second unit material is like getting to heaven and finding out that there's not only an 'all you can eat ice cream bar', but also one for pie and cake and cookies, too.