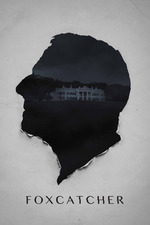 Incredibly startling in its enormity and beautifully distant in its vision; Foxcatcher is an american classic that combines impeccable performances, haunting cinematography, and an effortlessly tragic story in order to craft a film of mammoth and staggering flourishes. Bennett MIller's masterpiece revels in the unspoken, mulling through silence and emptiness in a world where everything is left unsaid. The film resembles the quiet pattering of a slight rain-storm, slowly adding more and more rain until the thunder strikes, leaving the audience shaken in a way that very few films accomplish.

The story, which at first glance seems weak in its approach, is a goldmine in terms of escalating themes, feelings, motifs, and character arcs. While the deliberate pace isn't for everyone, It's absolutely necessary for a film of such colossal ambitions and ideas. The build-up to the finale of Foxcatcher is unparalleled in its determination and its focus. Every detail, every look, every shot, every scene; It adds up to something of a marvel in terms of both effective storytelling and emotional escalation.

All three performances by Steve Carell, Channing Tatum, and Mark Ruffalo are remarkable in every possible way. It's a trio of performances that are so rare in contemporary cinema, and that's a truly sad thing. Each performance is so incredible that there really isn't a standout in the film, and as a result, the culminating emotional gravitas is as potent as anything on film in the last few years. Channing Tatum, just wow. Mark Ruffalo, just wow. And Steve Carell. Just wow. I really can't oversell it, these guys dig into their characters in such a way that it elevates the film to historic heights.

Greig Fraser's cinematography is some of the best of 2014, viewing the lonely and misty landscapes of Pennsylvania with a cold and aloof eye. It's a fascinating contrast between the freezing look and the unexpected poignancy, and it makes for some supreme images. Along with Rob Simonsen's HAUNTING score, the visual/aural combination is wondrous. It's indescribable really.

Foxcatcher, while undoubtedly an American masterpiece and one of the great films about America, isn't going to be viewed very often by me. It's incredible, emotional, tragic, mesmerizing, and layered; but It'll never be a film that I can throw on just about anytime. The experience is second to none, and as the film ends, the images are left to swirl around in your head and linger like the thick fog floating around the Foxcatcher estate. Viewing it too often probably goes against a powerful attribute of the film as a whole; the enduring feeling that is meant to be pondered and examined even after the details float away.