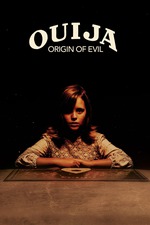 Hollywood's first post-Conjuring chiller in that it takes inspiration from jump-scare/spatial exploration yet flies past pale imitators with a hefty dose of sensitively-played familial trauma. If James Wan suffers in any category, and I'm in the camp where his weaknesses are minuscule at best, his optimistic, angelic outlook dampens the terror of his narratives, and this is where Mike Flanagan succeeds with flying colors, submerging delicate portraits within a story of the rising Past affecting their own buried agonies. It's true Horror, modernized but laced with remnants of The Fog, The Changeling, and The Night of the Hunter. Above all, Ouija: Origin of Evil is acutely aware of its influences, although they're technical rather than formal. Faux grain enriches Digital compositions, cigarette burns are peppered across various frames, and the 60s Universal Logo greets the viewer as they press play. It's not about nodding towards film-history but instead conjuring (hehe) up the aura of these stories. Less specific, more atmospheric, all starting with the amber glow of a seance and a crisp title card that'll make any Horror nerd shout out "fuck yeah" like a Pavlovian dog. Flanagan knows what scares the Blumhouse audience, and yet he doesn't succumb, playing with their expectations while sporting a devilish grin instead. Numerous jump-scares never arrive, silence overtaking the soundtrack to the tune of potent, haunting dread, but the selected moments utilizing a burst of an audio cue is either combined with a truly unsettling image or a sly, subversive nudge on the shoulder. Even cliche modern Horror sights, such as a little girl's face all contorted and misshapen, are given new weight and diabolical energy due to Flanagan's treatment of them.

This film isn't remotely interesting in concept, but gravitas oozes out of its warm, oddly soothing period detail and its classic bag of chiller tricks. The family, and likewise, any supporting characters, are comprised of delicately-drawn personalities, not archetypes, and the stakes and details carry through until the end, with the film reaching an emotional climax as well as a terrorized one. It's also a hell of a lot of fun in its economic confidence, building up scares only to let them fade away yet still holding tight onto the tension, and all the while allowing pacing to eventually unfold scare-to-scare instead of structuring the whole film as such. Ouija: Origin of Evil, for a good forty-five minutes or so, deals with the family more than the phantoms slowly slipping into their lives, but Flanagan argues that it's impossible to keep them at bay for long. What a fright-fest.