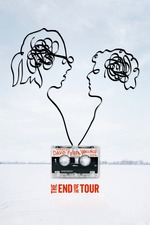 The End of the Tour is an intimate and delicate exploration of artists, their motivations, and their various influences on aspects of fame, ego, and relationships. With the perfect modern romance The Spectacular Now within his relatively-slim filmography, James Ponsoldt has already set a high-bar in regards to expectations, but I can happily report that my predictions for The End of the Tour came true. This is a beautiful film.

Supported by two stunning performances, The End of the Tour succeeds so brilliantly because of the rapid-fire and supremely naturalistic screenplay, allowing substantial character depth and richness to be drawn from the pages. Jason Segel is the most talked-about aspect here, and for good reason. His portrayal of David Foster Wallace is truthful, heartrending, layered, and gorgeously felt. I was drawn into his mannerisms, movements, and physical quirks instantly.

As someone who is unfamiliar with DFW, as I've never read his famous novel Infinite Jest, I still found Segel's performance to be exceptionally authentic and real. Never did I see the usually-comedic performer on the screen. Instead, I witnessed a role that transformed and changed in various ways throughout, both in external and internal fashion. Easily the finest performance I've seen so far this year.

Jesse Eisenberg is side-B to Segel's side-A, and that is possibly the finest compliment I could give. Their relationship is one of the most beautiful and spellbinding dynamics that I've seen in quite some time, and Eisenberg is fantastic in playing off of and aiding Segel's work. In a way, they're inseparable as performers, as one wouldn't be nearly as great without the other. No moment feels false or heavy-handed, and it's extraordinary just viewing two artists compare, fight, discuss, and unleash darker and more complex feelings to each other.

James Ponsoldt's direction is splendid throughout, and his framing of conversations as well as the shivering Midwest US is spot-on. Particularly in heated arguments, his direction resembles a sharp sort of dance, balancing and favoring different individuals within certain points of verbal questioning. The film is more of an odyssey than anything else, following two people as the glow of Fast-Food signs and bellowing snow surrounds them during their travels.

Overall, The End of the Tour is another knockout by James Ponsoldt, who is one of the most exciting directors working today. Awe-inspiring performances, a wonderful screenplay, and a visual feast of scrumptious snow banks and quivering sunrises all culminates in an independent film that shouldn't be missed at any cost. A masterclass in feeling and beauty.