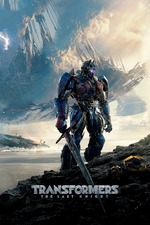 Was I disappointed? Yes. Does that matter? Not....really?

- I forgot how the 'police car' Deception has "punish and enslave" written near his bumper.

- There's a cut from Arthurian legend to a sight in the cosmos and I immediately thought of 2001: A Space Odyssey. Take that as you will.

- Anthony Hopkins did this to get paid and get photographed in slow motion while wearing nice clothes. I'd do the same.

- Bumblebee re-connects himself mid-battle like a wrathful pile of magnets and it's the most formally dazzling thing in any of these movies.

- That, sadly, makes up most of the interest in regards to amazement beyond Bay's typically superlative tech fetishes. The Last Knight is a conceptual one, and that means words.

- My next point: I don't think Michael Bay knows what an alphabet is.

- My (next) next point: words are just a construct, so if you want to have Mark Wahlberg play an ex-inventor/transformer saver named 'Cade Yeager', might as well commit to the fact that words are meaningless in the face of imminent destruction and that death swallows up any understanding of linearity in time. Because during this movie, I think I died, and now I'm all 'Amy Adams in Arrival' right now.