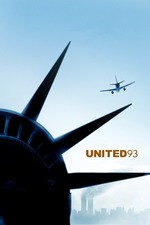 Paul Greengrass, even above his handheld intensity and dramatized honesty, is focused on various systems and their interconnections. United 93 is the only film of his that uses that form as a physical springboard, following basic traffic controllers to different divisions of army personnel and government agencies. It's fascinating (and intense as hell) to watch as startlingly important information tumbles through different telephone lines like a increasing maze of codes, digits, orders, and digital communications.

And yet, when the chaos stands still as multiple control rooms witness the second plane hitting the tower, Greengrass handles the horrific subject matter with a kind of alarming grace. United 93 bursts its most disorderly moments with scarred humanity and desperate reaches of adversity, and as a result, my stomach is in knots. One of the few films that makes me feel physically ill, and it's a piece of work that I will respect endlessly.