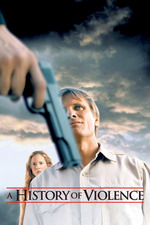 A History of Violence

Rewatched with commentary by David Cronenberg

Interesting and insightful. Cronenberg provides an analysis of sorts throughout the film. He puts us into the mind of the characters, telling us what they might be thinking and how they might be feeling in certain scenes. Some things I'd already taken into consideration the many times I've seen this film, but there's a lot of things Cronenberg brings up that I never even thought about. He also talks about what went on behind the scenes, like how Maria Bello injured herself while film a certain sex scene and how her and Viggo Mortensen would get into their roles but he mostly analyzes his characters which is just fine. Very interesting commentary thanks to Cronenberg's comments and his super cool voice.

Also, if you ever thought this film had a similar style to any of David Lynch's films, it's not. Cronenberg just flat out says this is nothing like a Lynch film.