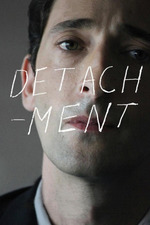 American History X is one of my favorite, most uncomfortable viewing pleasures and when I found out it's director Tony Kaye followed it up (for his first film in over a decade) with Detachment, I was excited. I had very high hopes and Kaye even exceeded my expectations. In fact, if you ask me, it's better than American History X and shows how much he's improved as a director. Like American History X, this film is uncompromising, uncomfortable, unflinching, and just plain compelling to watch.

Not many directors are able to express what's on their minds in terms of important and heavy subject matter without coming off as too preachy or obvious (take Bobcat Goldwaithe as an example of someone who couldn't do this with God Bless America) but Tony Kaye makes it look so easy. He didn't write the film, but it's clear that Kaye believes this is very important subject matter. We all know that the American school system across the globe is pretty fucked up and a large part of it is a joke (this coming from a current high school Senior) but while Kaye never denies this is a fact, he expands on it. He tells the audience exactly what's on his mind and he does it so well, you never think to yourself "Who wrote this?" or "These don't sound like people; this is coming from a writer's mouth and what's on his mind." like with the previously mentioned Bobcat Goldwaithe. Everything feels honest and genuine not only because of the director, but the excellent performances from the actors involved.

This is easily the best performance I've ever seen from it's lead Adrien Brody. It reminded me, for some reason, of something like a much saner version of Travis Bickle. It's a performance that makes you completely buy into the character. It's like Adrien Brody completely slips into this character's skin without wasting a single moment on screen; not a single breathe of dialogue is wasted from this man. You know he's a good guy deep down and he wants to help these kids but he doesn't quite know how to get to them and it's eating him a bit inside that half of the kids he sees each and every day are lost causes. It's a brilliant performance and it's hard to keep your eyes off him when he's on screen.

As for the other actors, many of the adult performances are small, but they are still great. Lucy Liu gives a very low-key performance throughout the film until she suddenly commands the screen by giving such a powerful and just on-the-nose monologue. James Caan, Marcia Gay Harden, Tim Blake Nelson, Blythe Danner and Bryan Cranston (just to name a few) also help round out a great supporting cast. Even the kids are pretty good. There are some in the beginning that aren't quite convincing and even a little laughable, but as the film rolled on, they got better and some even were great. The only weak link I'd say is Christina Hendricks. She really might be the Marilyn Monroe of this generation. Beautiful, but can't act. That isn't to say she's completely terrible. At best, she's decent. Just not as believable or convincing as she should be. Her role, like most of the supporting roles, is small so it didn't ruin the film or anything. There's too much good this film has going for it for one thing to spoil it.

I'd also like to just praise something I thought was brilliant to do on Kaye's part that I noticed. Not a single parent is shown throughout the film. They are discussed and you hear their voices, but you never see them. The parents (literally) aren't in the picture. I just thought that was genius on Kaye's part.

This is an excellent film and after this, I hope he continues to make more films because it's a crime that this is only his second. With fantastic acting, smart writing, and brilliant direction, Detachment is a must watch that I don't think I can recommend highly enough.

The Invention of Lying