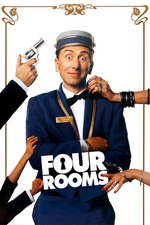 Four segments by four different directors with each segment led by a hilarious Tim Roth as Ted the Bellboy. Here's what I thought of each (might have mild spoilers).

Honeymoon Suite: The Missing Ingredient...by Alison Anders
A coven of witches (including an awful Madonna) try to create a potion but they need one more ingredient in one hour...jizz (eww)...after one of the witches swallowed instead of retrieved (ewwww).
Worst segment. Not a very good short, in fact the story sucks, but Tim Roth makes it watchable. He's comedic timing is just genius. He's as over the top as he is in the following shorts, but he's so over the top it's golden.

Room 404: The Wrong Man...by Alexandre Rockwell
Ted is called into Room 404 where he is held at gunpoint by a man who accuses Ted of sleeping with his wife.
Very funny segment. The entire thing plays on Roth's shoulders and he is golden. Aside from Roth, you get some other funny moments in the short from the other characters.

Room 309: The Misbehaviors...by Robert Rodgriguez
A couple pay Ted $500 to watch their kids while they attend a New Years Party.
Not as funny as the others, but it definitely has it's moments. Most of those moments only come up, again, because of Tim Roth. The kids are alright and it's sorta funny seeing their shenanigans in the room, if you can call it that. Antonio Banderas is pretty fun to watch too.

The Penthouse: The Man From Hollywood...by Quentin Tarantino
After a chaotic night, Ted decides to quit but for one more job, he is told to take care of a famous director (played by none other than QT himself) in the Penthouse Suite.
Easily the best one. Not only is Roth great, but so are all the other characters including QT (who is fun watching trying so hard to be cool) and even Bruce Willis. Not only is it funny, but very interesting and fun throughout.

All in all, each one has their fair share of moments but the main reason I enjoyed this was just the all around fun and golden comedic performance from Tim Roth. He is the sole reason to watch this. Whether or not you like this film, I'm sure you'll enjoy Tim Roth. It's sorta like watching Jerry Lewis in Monty Python fashion.