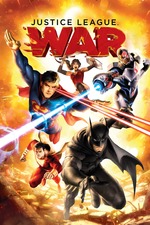 DC finally made their own Avengers.

Yes, I know comparing an animated film to arguably the greatest superhero film ever sounds like blasphemy, but I honestly think that if the live action JLA movie is anything like this in terms of characters, story, and action, then that has potentially to be the very best superhero movie ever. This was just about perfect. From the dialogue (Wonder Woman's characterization especially was the best I've ever seen on screen; not to mention its the most badass I've ever seen Superman in anything) to the way the League interacted with each other to the fight/action scenes to just the central story...just all of it was perfect. If I had one minor gripe, it was that there was a kid in the movie, who I liked in some scenes but annoyed me in others and even then, there's a twist that makes up for it (well, its a twist if you know nothing about Shazam's backstory; I didn't even know he was gonna be in the movie) so it's all good.

So if you ever wanted to see a DC film that comes anywhere near close to the awesomeness of Marvel's Avengers, look no further than this movie.