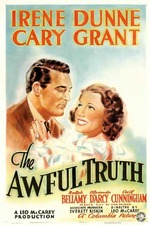 Featuring Nick and Nora Charles' wayward friends. Cary Grant begins his maturity as the most adept light comedian on the planet. He does wisecracks, double entendres and slapstick with equal aplomb. The bit with the chair at the recital is a superb example of his timing and athleticism. Irene Dunne can't match him in the physical stuff, but she's game and funny in her clumsiness. Ralph Bellamy plays the ultimate hick Texan with more money than brains. It's a characterisation that must have impressed Howard Hawks, who used it virtually unchanged in His Girl Friday. Also, in a fantastic comedic performance, Skippy, the wild fox terrier, as Mr Smith, the child surrogate which reminds the Warrinders why they're together.