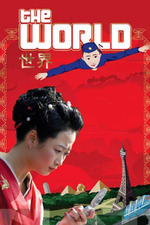 This is a movie. That I watched. Today.

This was decent. Intellectually, there are certain moments that I recognize as "good." However, for me personally, The World is overlong, tonally flat, too aimless, and lacks the little-yet-significant things necessary to fully engage, touch, or move me.

Watching this felt like recognizing a diamond but only spotting it through a telescope, as it's cast upon a distant shore far too distant for its value to make a bit of difference to me. The remoteness renders it a mere, inaccessible mineral.

Put another way, I like to imagine directors as professional fishermen, each equipped with their own unique tackle box filled with tools that they've diligently honed. For whatever reason, Jia Zhangke's fish hooks are made in a way that they simply don't hold me.

Despite my interest waning and my mind wandering in spots, I still consider it "interesting-enough," which is a tepid plane of existence located somewhere between "appealing" and "cool story, but who fucking cares?"

This will likely be my last attempt at trying to connect to Zhangke's work. At least for a while. For now, I will add him to the list of generally beloved auteurs that are more miss than hit for me.