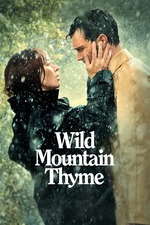 From the same mind that brought us 'Moonstruck' (Norman Jewison, 1987) and the self-directed 'Joe versus the Volcano' (1990) and 'Doubt' (2008), John Patrick Shanley's 'Wild Mountain Thyme' is, to put it lightly, a failed romantic comedy. While the cast provides mixed quality work - Jamie Dornan and Emily Blunt give decent enough performances on their own, Jon Hamm just feels like he’s along for the ride, and Christopher Walken is a huge, huge miscast - they are let down by a largely poor screenplay. The story is at first slow and then weird and slow and then just flat-out nonsense. A huge, huge mess. The scenery of Irish countryside is quite lovely to see though.