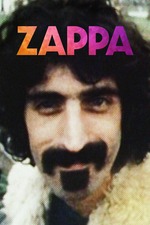 I believe that Zappa (this doc) is unique in a big way that has nothing to do with Zappa. It felt like an appetizer that fills you up. Like a summary with an arch. It touches spots and moves on without dramatizing them but you totally understand the complexities that are natural to any relationship. Not dramatizing everything out was ingenious because that would have made the doc a bit cliched. I became aware of this when they started talking about Moon Zappa and Valley Girl, I started thinking ‘oh shit here’s where they force in the dramatic element about a daughter who wants to reach out and a father who is too involved in his own career to see it, but all will be redeemed at the end and we’ll cry because Zappa will have said something profound to Moon as he lay dying.’ But that’s not what happened, the movie moved on to new dramas like when Gail talked about Zappa’s cheating, or when the movie touched on how Zappa wasn’t particularly close to many people, it just did not become THE theme. Even the opening stuff with the Czech politics never formed into a theme. A lesser doc would have used one of these threads as an emotional arch. But it was just matter
-of-fact. Not mythology building (but not not mythology building, either) but not just a wikipedia list of this events.

So what was it?

It was an extraordinary film. I mean, it never pulled emotions from you or built a clear story narrative, but there was a narrative and emotions were felt.

It’s not like when I would watch a The Beatles’ doc and it was purely about the mythology of The Beatles. I almost think one could fictionalize a person and make a movie like this and it would be only a little less good than this.

There are a billion missing details but not very many missing pieces. I’m not sure if this will be seen as a great film, even if I feel like it is.

The best compliment I can give this film is that it probably could have just kept going for another hour or two and I would have been there for the ride hardly paying attention to the time, yet when it was over I felt completely satisfied.

The best thing in this movie was Ruth Underwood, how she talked about Zappa’s music, how she played Zappa’s music and how she hid her face when she was crying about Zappa. Without her this is just a really great film. With her this is a masterpiece and I don’t know exactly why that is.

(The one flaw in this film is that at the point in which it plays G-Spot Tornado it should have just played the entire performance of G-Spot Tornado because by that point in the movie the audience is already with it and by having the entire piece of music, which is not very long, playing it would’ve only made this film that much better).