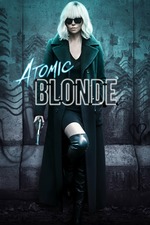 The story takes place in East and West Berlin in 1989, just on the verge of the fall of Berlin Wall. Like water in burning oil, there is an explosive threat of a microfilm containing a list of all active agents in the Soviet Union, let out in the open. Suddenly all sides of the borders get very busy.

It takes an extreme style in the spy genre with a soundtrack filled with 80's music, which is screwed up to the maximum. In general, very entertaining in the same style as director David Leitch did with John Wick. A fresh take in the spy genre, with a good mix of action, intrigue and twists, enough to keep one interested - although it feels pretty predictable in the long run. Perhaps a bit hasty with the plot, lack of substance and lack of time for the various introductions. Next, the first scuffle with Charlize Theron was not too convincing, but that was taken care of later in the film when the tempo is raised tremendously.