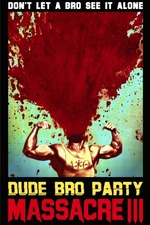 Okay, 100 minutes full commitment to a hilarious and unique satire of the slasher genre with absurd commercials and hard cuts between scenes, filmed like an old VHS tape in eminent editing with sound and special effects. It even has Patton Oswalt and Larry King as cameos and Greg Sestero.

That was the concept where the plot itself is like the 3. instalment in a cheap slasher franchise is rather goofy when watched without context since because technically it had no prequels.

It's senseless and silly in any way but when it comes to the effects however, this is your deal. It has plenty of gore and numerous kills in all sorts of imaginable obscure ways. A piece of good advice, find your friends, who have the same crazy interests for horror in general with sub love for slashers, satires, trash and comedies, and watch this fucked up film together.