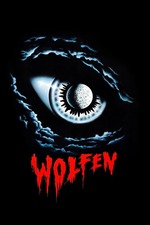 Say whaaaaaat?! This blowing my mind! I just got a total revelation today while I was watching Wolfen. It occurred to me that James Horner was the composer and he did also stand for the score for James Cannon's Aliens three years later and the only reason I was aware was that exact same trombone tones were also used in the score for Aliens.

Oh, yeah, the film was mediocre and close to being too boring, it did, however, have some interesting things and funny pre-Predator vision, but I would prefer to rewatch The Howling, Bad Moon or An American Werewolf in London instead.