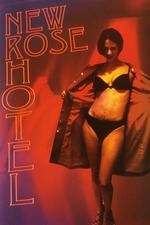 OK, we have a pretty standard noir set-up: Willem Dafoe and Christopher Walken hire a honey trap (namely Asia Argento) to lure a Japanese DNA scientist away from a rival corporation and get played themselves by the Argento character. So far, so femme fatale. First irregularity is that nearly all of the major events happen offscreen, or are glimpsed via grainy digital video (as surveillance footage, as small images on then-futuristic mobile devices, or as abstract blurs of unknown providence). We mostly see an array of faces, partially glimpsed bodies, light shows and seedly hotels. The dialogue is deeply strange and often irrelevant to proceedings. Walken's performance is bizarre, affecting a limp and a walking pimp-stick which he waves around like he's doing a vaudeville act. He limps around declaiming non-sequiturs in an Orson Welles type voice. Possibly the greatest WTF in cinema history is the restaurant scene where Walken announces he's written a haiku and then recites a punchline-free joke about a dog in a suit who goes to a bar and orders "toilet water". Then shouts "Barman! Coleslaw for everyone. It's a pity there's nobody here". Uh?
After the tables are turned and the Walken character has lept to his death in a shopping mall, Dafoe creeps back to the titular New Rose Hotel, which seems to be some kind of derelict capsule hotel, definitely situated somewhere near the end of Lonely Street. He replays the betrayal in his mind in a series of distraught flashbacks. This scene takes up HALF AN HOUR, the last third of the movie. Yes, basically the whole film replays itself at the end. But, the absolute kicker, these scenes retold in recollection seem to be all completely different takes from the ones in the first hour, sometimes very different. The impermanence of memory, or just a clear indication of the tables turning?
Everything in New Rose Hotel looks 90s-as-fuck, right down to the Japan-mania (remember when everyone thought Japan would dominate the 21st century?).We even get a Ryuichi Sakamoto cameo performance. However, much is alarmingly prescient. Two idiot men who are so obsessed with their petty power games that they refuse to look at the evidence that their smug self-satisfaction is unwarranted when it is in front of their faces, and take little digital moving images as undeniable evidence of their absolute truth. A polluted capitalist dystopia where governments and corporations are inseperable siamese twins. Made in 1998, folks.
New Rose Hotel is either an outrageous folly or a brave and pretty much wholesale re-imagining of film form. Its the kind of thing a lot of people would call "dreamlike", a term I hate to use 'cos it doesn't really tell us much, but when I fell asleep last night the landscapes herein did indeed re-appear in a dream.