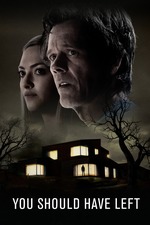 You Should Have Left is a horror film that is a little hard to describe without getting into major spoiler territory. I will say that the film comes across as halfway between a haunted house film and Theo Conroy’s growing paranoia over the course of the story. The film features a recurring element of Theo listening to a self-relaxation tape to try and calm his nightmare-inducing anxiety, which is made worse by his growing suspicions that his wife Susana might be having an affair.

I’m going to cut to the chase and say that You Should Have Left is a film that fits in the lower-tier of the Blumhouse filmography. It was obvious that this was a film made for a relatively low budget, since the bulk of the plot takes place at the house, with there being very few supporting cast members, with the one the gets the most screen time being an exposition-spouting grocer named Angus (Geoff Bell).

There is nothing inherently wrong about You Should Have Left, however, it is a film that doesn’t really leave much of a lasting impression. The horror in the film is mediocre at best and the overall plot is quite confusing at its worst.

Things I Do for Money