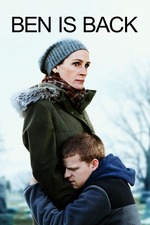 When the credits rolled, I asked my wife, “What was the point of that?” And it was not intended to be a jab at the movie, but a genuine inquiry into what it was trying to accomplish. We talked for a solid hour and a half, so maybe that’s part of the point.

This is intense and emotionally high-strung. However, the quick pacing of it prevents any critical moment from truly sinking in. It’s supposed to take place over 24 hours, but the urgency of that ultimatum never set in or increased the pressure of the situation. Some of the personalities and perspectives reversed so quickly, I didn’t know who to trust (and again, maybe that’s part of the point, too, but it felt unintentional). That also contributed to mixed performances from our two leads — don’t get me wrong, they did great in the roles they were given. The problem is those roles seemed conflicting occasionally.

Yet, there is some undeniable sincerity to it and worrisome heartbreak, even if just in the potential of situations. Not a top lister, but not a terrible waste of time either. It has its place.