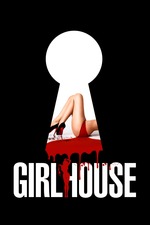 Humiliated sexually as a boy by two girls and then murdering one of them as she tries to ride her bike home.The killer known only as "Loverboy" grows up socially withdrawn and psychotic.

Flash to the present and he's sitting behind a computer cyber stalking young women who live in an X rated big brother type Estate called "GirlHouse".

He becomes fixated on new girl "Kylie" played by Ali Corbin then the cat and mouse game ensues because of course he's somewhat of a whiz when it comes to hacking,anything mechanical and finding the Girlhouse.There is plenty of female nudity and the girls are really pretty.Adam DiMarco as "Ben" is really cute and gives us girls something to look at as well.

Loverboy is effectively creepy with his pull on mask with it's female face and long hair.He reminds me somewhat of Frank Zito in Maniac as far as how crazy he is.

I enjoyed it much more than I expected and have watched it twice. I would recommend it to slasher film lovers.