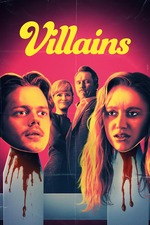 Does anyone remember The Perfect Host from 2010? You know, with David Hyde Pierce, Frasier's little brother from Frasier?
What about Clayne Crawford? The guy who can pull off a moustache and hairstyle like it's the '70s or '80s - mostly demonstrated as his character in the Lethal Weapon series (from which he was fired, after lots of drama on set, mainly with his co-star Damon Wayans - but that's another story).

Ring any bells? Because Villains is very much The Perfect Host, except here, the main cast of two is doubled to four, with an extra element thrown in to add some heat to the dish.

When it comes to Bill Skarsgård I'm pretty neutral (at the time of writing anyway; who knows what the future might bring), but I've always got time for Maika Monroe (It Follows, The Guest). I understand she's 14 years my junior, but that's not too bad, is it?
And then there's Jeffrey Donovan, of Burn Notice fame*, where for the majority of its 111 episodes, he would ham it up as different characters (and sometimes different accents) while helping people in trouble, using his special ops skills as an ex-spy.
Here, Donovan is playing the villain, but he's certainly having fun playing another one of his colorful 'characters', in that playful manner that he's just so good at.

(*Famous only for those who know and have seen said show. Though I now recall him also playing a main baddy in Fargo season 2. So there you have it. In recent years, the man's gained more recognition than I initially gave him credit for.)