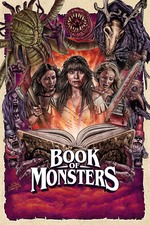 Troubled by a traumatic childhood incident, a teen and her friends decide to throw a wild party for her eighteenth birthday, but once the guests arrive a deadly ritual is invoked unleashing a horde of monsters looking to complete a dangerous ritual and forcing them to stop its plans.

For the most part, this proved to be an exceptionally enjoyable effort. One of it's strongest aspects is the manner in which this one works the fear of growing up into a decidedly fun effort. With a fantastic start that provides a reasonable and wholly necessary motivation for the fear she has towards the event and colors her emotional memories of her mother's incident, there's a great start to this one that gets played out rather nicely here. These events are rightfully psychologically scarring but to also see this hasn't affected her in most stereotypical manners is quite refreshing with the way the early goings of the party which is rather fun. It's once the creatures arrive at the house where this one really turns into a full-on blast. The creatures running wild on the guests at the party offers up scores of highly-enjoyable antics here which are all the more fun due to the practical nature of the effects. Given that the various and multiple monsters and creatures are shown to have memorable and unique designs that are driven by that manner of practical costumes for them, there's an added sense of fun in seeing the spike-backed ox creature or the gnome-worms running around the party as there's a sense of realism in seeing that occur. Given that these also manage to unravel the mystery behind their appearance and the ritual that's at the center of the creatures appearing at the house, this prepares us nicely for the overall fun of the finale where it tackles the creatures being taken out in rather fun fashion and unleashing plenty of over-the-top confrontations and action-packed encounters that leave this with a lighthearted tone alongside the thrilling sequences. These here hold the film up over it's few minor flaws as there were several small problems with it. The biggest issue is the absolute lack of clarity as for what's going on as the decision to keep the information about the creatures' appearance until the very end doesn't mean this makes any sense. The running time is spent with everyone around the party wondering what the purpose of them appearing is supposed to be for, and even their attempts at figuring out the translations in the book don't amount to much with several questionable aspects. As well, there's also the rushed finale which handles the action in a decidedly quick manner, making this one feel like the final boss battle between them and the most dangerous demon is a tad underwhelming. Otherwise, there isn't much wrong with this one.