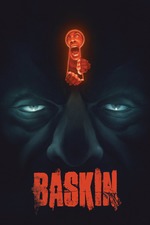 Baskin is a grotty film based on a short film of the same name and that's not exactly surprising, as despite the 90 minute runtime, there's only really about 30 minutes of actual plot. The basic plot focuses on five police offers in Turkey that get more than they bargained for when answering a request for backup at an old abandoned building. The film is essentially a descent into Hell and the film takes obvious influence from genre classics such as Hellraiser in its very fleshy depiction of the underworld. The final third is pretty great as a horror show within itself, but it's a shame that the preceeding hour was not better utilised as giving us better character depictions might have helped in terms of ramping up the horror. The film does look very nice - director Can Evrenol creates a foreboding atmosphere throughout and there's no shortage of nasty gore which should please genre fans! I think the director is one to watch for sure. I just wish that I liked this one more.

I watched the original short immediately after watching this and while it is effective in itself; it did leave room for improvement, which this feature length version didn't really capitalise on.