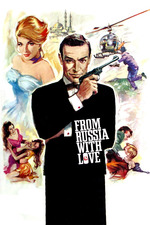 From Russia with Love

Probably my favorite of the original Connery Bond films. It’s not perfect, but it takes the genre seriously while also offering the right measure of Bond as a unique, confident and magnetic character. It clearly lacks many of the formulaic Bond elements that would later become practical requirements for the series, but it handles some (the spy gadgets, for example) with a lighter touch and less distracting self-awareness. Compared to Dr. No, Connery now has a better sense of the character, but hasn’t lost the physical vitality that I think the character needs to be credible. The final fight between Connery and Robert Shaw remains, for me, one of the more natural and convincing of the series.

Its handling of the female characters can be distractingly shallow at times, but it’s hard to expect more from a mainstream action movie from 1963. I think I could credibly argue that Tatiana is rendered with more depth than average for ’60s-era Bond, although clearly psychological complexity was not a priority for Bond or any other character here.